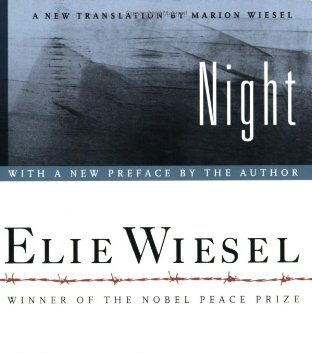 Night, Elie Wiesel’s memoir-and-novel-in-one, tells the story of a boy surviving the Nazi concentration camps only to be, as the Chicago Public Library puts it, “devastated by the realization that the God he once worshipped had allowed his people to be destroyed.” “…in the blackest of nights,” an Emel Magazine review has it, “faith is a force of will.”

“With striking bluntness and clarity,” The Candor reports, “Wiesel recalls…the hellish environment into which he was thrown. …It’s clear that Wiesel chose each word carefully, not wasting a single one….” The book, just over 100 pages long, is a “slim volume of terrifying power,” according to The New York Times. “It took more than a year to find an American publisher,” the newspaper mentions. In its first 18 months in print, Night sold just 1,046 copies; it went on to sell more than 10 million.

Wiesel “made it his life’s work to bear witness to the genocide committed by the Nazis,” his 1986 Nobel Peace Prize-winning citation states. In a preface to the book, Wiesel himself explains, “…to forget the dead would be akin to killing them a second time.”

The previous Featured Book, Parker Palmer’s On the Brink of Everything, is now available in the Library.